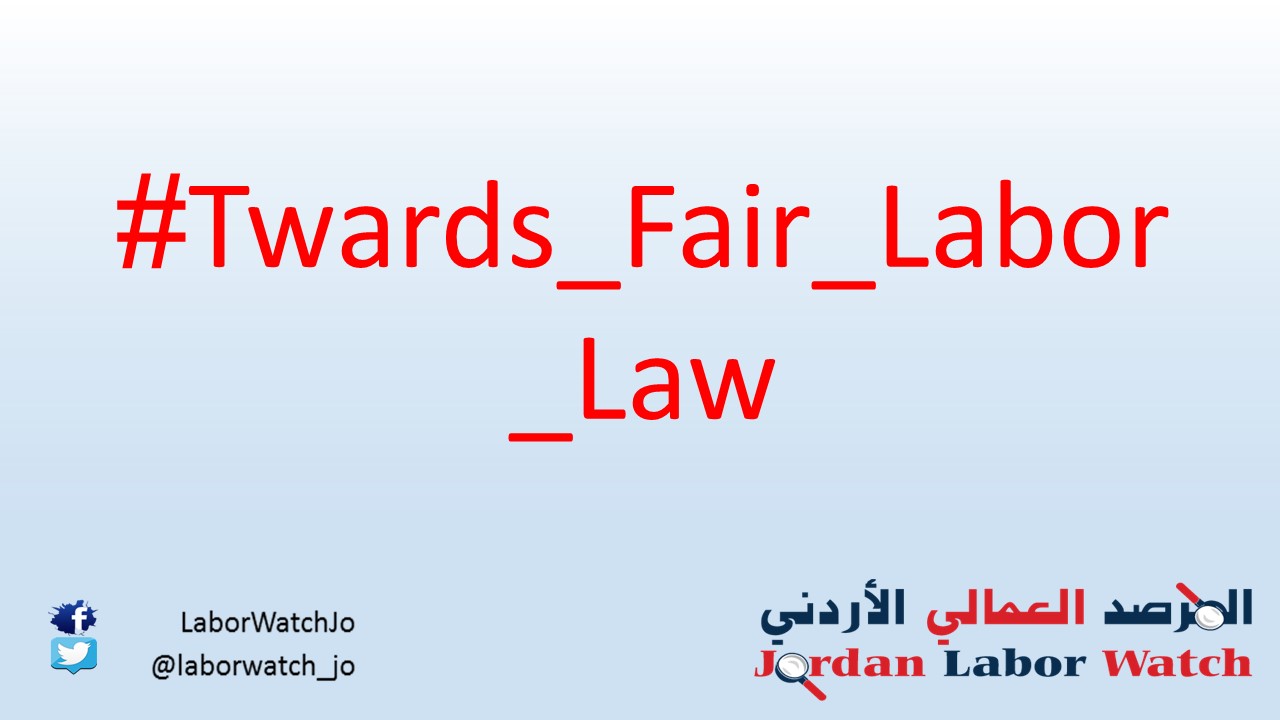 Jordan Labor Watch – Jordan Labor Watch, a subsidiary of the Phoenix Centre for Economic and Informatics Studies, launched on Sunday the “Towards a Fair Labor Law” campaign aimed at lobbying for proposals recently submitted by the Labor Watch to amend some articles of the Labor Law which are currently being discussed before the Parliamentary Committee for Labor, Social Development and Population.
The campaign seeks to emphasize the importance of taking advantage of the labor law discussion in the parliament, to demand for amendments for some articles to make it more compatible with international labor standards and decent work conditions and fundamental principles and rights at work, and to be more in line with the provisions and spirit of the Jordanian Constitution, Comprehensive national plan human rights.
The campaign will last for two weeks, during which the Labor Watch will organize several media activities aimed at forming a consensus on amending these articles, the campaign also focuses on the use of media and social media to disseminate messages emphasizing the importance of modifying these articles, in addition to field meetings with labor activists to obtain their support.
One of the prominent amendments being proposed by JLW concerns labor dispute in article No. (2) in the temporary law, which saw the removal of “group of workers” phrase, which provides that “any dispute arising between a group of workers or a union on one hand and between an employer or a trade union on the other, with regard to the application or interpretation of a collective labor contract or relating to the conditions and conditions of work”, the Labor Watch asserts that the text must remain the same to be consistent with the definition of “collective labor contract” in the same article, it also provides the possibility of providing protection to workers and their representatives who have disagreements about working conditions with employers and do not have a trade union, because the vast majority of workers in Jordan are denied the right to form trade unions.
Concerning the compensation for arbitrary dismissal, the Jordan Labor Watch suggested that the financial compensation shall cover one month per each of the years in which the worker has been employed by the company, in addition to a minimum wage of four months and other benefits stipulated on articles 32 and 33 of the Labor Law.
The Labor Watch also recommended the amendment of Article 31 on the restructuring procedures of business establishments, stressing that the Ministry of Labor shall approve any action aimed at the dismissal of employees before its execution and add a phrase provides (shall be compensated in accordance with the provisions of Article 25 of the Law).
The Labor Watch also suggested the amendment Article 44 (a) concerning collective bargaining between employers and workers and / or their representatives on any matters related to the improvement of working conditions, and productivity, Such negotiation shall be at the request of the employer or the workers and / or their representatives within a period not exceeding 21 days from the date of the written notification by the party wishing to negotiate with the other party. The Labor Watch stressed that limiting the negotiation to trade unions only; deprive the majority of workers in Jordan of collective bargaining aimed at improving the conditions of their work, because the majority of workers do not have trade union representation.
Regarding article 52, concerning the determination of the minimum wage by the Tripartite Commission, the Labor Watch proposed adding a paragraph under which the obligation to raise the minimum wage should be reviewed annually on the basis of inflationary indicators as determined by the Department of Statistics.
The Labor Watch pointed out that Article 58 caused exploitation of thousands of employees as it stipulates that: “The provisions of articles pertaining to the working hours provided for in this law shall not be valid towards the persons who assume the functions of general supervision or ad-ministration in any establishment and who work in some cases outside the Establishment or whose jobs require travelling or mobility within the Kingdom or abroad.”
The Labor Watch stressed that this article force some workers to work more than 48 hours a week, this falls within the so-called “forced labor” without receiving the overtime allowance. The Labor Watch suggested linking the non-payment of the overtime allowance to senior management positions and directors of departments in the institution, and to large enterprises with 100 or more workers, and canceling workers whose work requires the mobility from this article.
in regard to the constitution of trade unions, the Labor Watch called for modifications in Article 98 aimed at the abolition of the powers of the Lower House Labour, Social Development and Population committees mentioned in paragraph (d.1) to determine the professions and sectors in which the unions are to be established, stressing that the article’s text violates the freedom of association, as the current law contradicts the international labor standards contained in the Human Rights Bill and the relevant international conventions, which was ratified by Jordan 12 years ago.
The Labor Watch calls on workers, labor leaders, civil society organizations and activists, trade unionists, journalists and media professionals to contribute to the campaign by expressing their opinions using #Towards Fair Labor Law hashtag.
All information and materials, including photos and videos about the campaign, can be found on Facebook page (https://www.facebook.com/LaborWatchJo) and Twitter (https: // twitter). com / laborwatch_jo), which will be published daily, starting today.